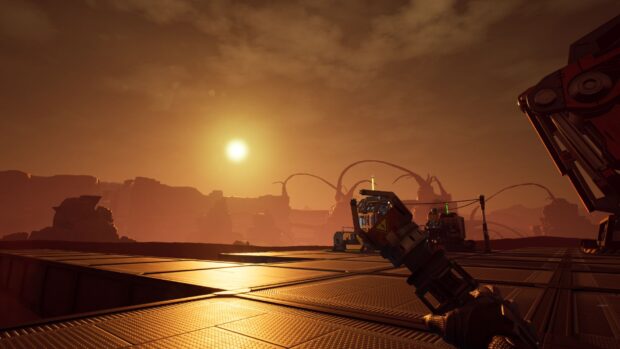 On to the PC then ! The most played game especially for the first half of the year has to be Satisfactory. I finally really got into it, after my previous efforts were usually stranded once I got up to the oil stage and found it too much trouble to go look for it ;). I picked a different location to start this time, in the Northern Forest.  Also this was update 4 so it is a bit more polished. Now that update 5 came out not too long ago, I will probably get back to it again soon. Besides Satisfactory I also kept playing Oxygen Not Included, and factorio with the excellent Krastorio addon to make it a little more interesting. As far as building games go.

Another builder game I got into early in the year was Dyson Sphere Program. Although in the end, once I got to build the Dyson Sphere, I had enough of the game. It’s still updated as it is still in Early Access, so I’ll watch a youtube video here and there to keep up to date. Or checkout the subreddit.

The second half of the year I played a bit less, I think, or just nothing too memorable came to pass. I did play Voice of Cards which is a pretty nice game. Actually almost finished it, if it wasn’t for the last boss fight to be rather annoying. I did like the story and the gameplay though, even though it got a bit repetitive i the end. Dorf Romantik is a fun puzzle game to play for a few hours here and there. Same goes for Mini Motorways. Another deck building game I enjoy is Banner of Ruin. I haven’t even unlocked all the different type of animals yet you can start with. Monster Train, another deck building game,  is also enjoyable, and still being updated. Gas Station Simulator was also fun, I haven’t quite finished that one yet. It got a little repetitive towards the end.

So quite a few enjoyable indie games, but nothing that really stood out. I haven’t touched a lot of the games that made it to the Steam awards. I don’t think I will check out a lot of triple A games any more. Too expensive for what they are, when you compare them to indie games where you can have hours of fun for say $20,- or even less sometimes.

As far as MMOs, I only play Elder Scrolls Online regularly. Mainly a few quests on the weekend and pick up the daily rewards during the week. It’s still quite enjoyable, even if you play solo. All the quests are voiced, and they are usually decently written. The latest expansion’s main quest was a lot of fun with some interesting twists, I enjoyed that one quite a bit.