An okish episode this week. Which was to be expected after last week’s mindnumbing ‘The Constant’. But it could have been a lot better, this week had some very corny / cheesy scenes that I wouldn’t expect in Lost. Ofcourse a Juliet centered episode can’t be all that bad as she’s very easy on the eyes.

For example the whole gas thing. I didn’t quite understand why it was such a problem all of a sudden that had to be addressed. ‘Oh noes the whole island will be gassed by Ben and we’ll all die !’. It didn’t have any excitement to it, because it would be an odd ending to the show ;).  And I assume the countdown started because Daniel was screwing around with the console ? Could have done without the dramatic and very cheesy countdown, with just 3 seconds he managed to miraculously type in the right command. And I didn’t see a manual there, so how would he have a clue how the whole thing works anyway. And I won’t even mention Dan’s typing skills with huge gloves on…

It’s very stressful being an Other, Jack

Then we got another silly scene with Jack and Juliet, ‘especially when he knows how I feel about you …’, and ofcourse they started to kiss after that. Could have done without that scene as well. And before that Juliet started to protect Charlotte, who was beating the crap out of here just minutes before…

Anyway now I got that off my chest, there were also a lot of nice things in this episode. Ben courting Juliet was very funny to see. We got to see a new side of Ben. Also loosing it and being out of character was new I think, when he told Juliet ‘you’re mine !’. Very soon he recouperated though and said ‘take your time’, which was also very funny. 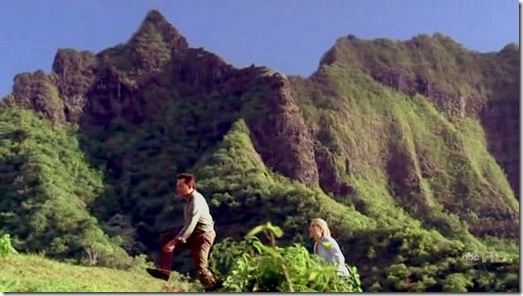 Furthermore there were voices/wispers again, right before Juliet’s therapist, Ms. Harper showed up again in the middle of nowhere and also disappeared as fast as she showed up. Also we now have official confirmation that Widmore is behind the boat offshore, but that wasn’t very thrilling. It was also nice to see that Dan sucks at lieing and he doesn’t seem to like violence a lot.

The rabbit, it didnt have a number on it, did it ?

Hope next week will bring somewhat more excitement and answers !