A very decent episode this time, but not as good as the previous three, but that was a hard act to follow. Here are some thoughts and observations.

What a lot of people expected turned out to be true, Ben was behind the lawyer that was sent after Kate, so she would start to run. Ben overall did do a good job of getting everybody together after all. Though Jinâ€™s role might not have been what he expected. I assume she is getting ready to kill Ben, but knowing Ben he has a few more tricks up his sleeve. The whole Hurley situation was resolved by Benâ€™s lawyer (who is that ?) rather easily, and I thought that was a bit too convenient. He looks great in orange, by the way. 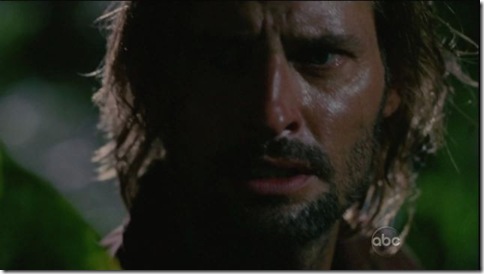 The scene where Sawyer saw Kate help Claire giving birth was touching. Could it indeed be that the wispers weâ€™ve been hearing all along were the losties skipping in time ? I canâ€™t remember if we heard wispers in the original of this scene. Sawyer didnâ€™t want to talk about this much, probably too painful, but Julliet had a keen interest in what he saw.

The whole Canoe scene was a bit over the top. What it supposed to be faster or safer to take the boat ? Or was it just to give us some fun scenes. Especially Sawyer was funny â€œThank you Godâ€, when the time skipping occured during the shooting. Then when they tumbled into a new time period in the rain: â€œI take that back !â€. 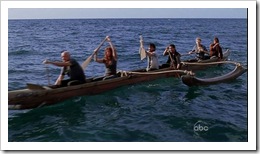 What is really weird with the canoes was that they traveled through time with the Sawyer / Locke group ! What exactly are the rules for this ? If an object is in the hands or a â€˜time skipperâ€™ is into said object, it will travel with them ? That time period seemed to be the future, but who were the people following them, and why did they immediately started shooting (and luckily doing a very poor job).

Overall I think the time traveling has to stop in one of the next episodes. First of all it seems that just about everybody is starting to suffer from nosebleeds, and weâ€™d have no one left unless Daniel comes up with a solution. Besides that itâ€™s starting to loose itâ€™s effect a bit. It was spectacular and an interesting story telling mechanic the first few times, but itâ€™s just getting a bit confusing the whole â€˜When are we nowâ€™-situation. 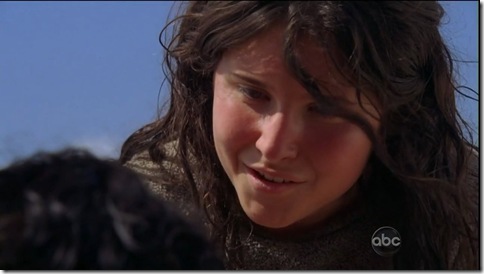 The ending sure was surprising. I am glad I watched the episode spoiler free ! Jin being still alive was great. They sure kept that a well hidden secret. I am not sure what the deal with him is though. Is he skipping through time with the other losties, or is he somehow stuck in time, about 16 years before all the events when Rousseau stranded on the island. Rousseau does look a bit too young, but I donâ€™t think we have to read too much into that. What happened to Jin anyway ? Did he get away somehow before that explosion on the boat ? It did look rather lethal.

Looking forward ofcourse to the next episode, the six should start heading to the island fast, and I hope the time travelling thing is resolved soon enough as well, or at least not as chaotic as it has been in this episode.