This place is death was yet another fine episode, though it seemed to be more focused on explaining things and moving the story along, than the emotional drama we got in earlier episodes. Of course Charlotte dieing was sad, I wonder how this will effect Daniel.

In â€˜this place was deathâ€™ we get to know more on Jin and the Rousseau-gang history. It was nice to get a bit more info on that. They were attacked by the Smoke monster early on when they got onto the island. One of them was killed right away. Itâ€™s strange how the smoke monster picks his victims, it would be nice if we would find out later on. It seems that people change once they get dragged down Smokeyâ€™s hole, and they are revealed things about the island. Robert knew about Smokey being a security system for the temple. Rousseau seems to be certain that the others are all diseased and kills them. And almost shot Jin in the process. Nice to see Robertâ€™s gun failing, the island didnâ€™t let him shoot her. 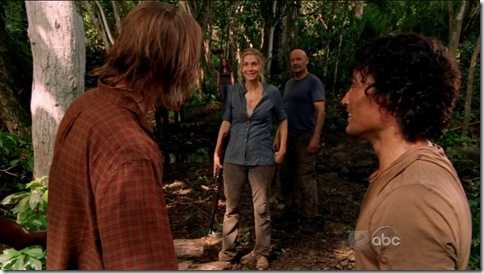 The oceanic six fell apart again, Hurley (this was another episode with him unfortunately) doesnâ€™t seem to be too eager to go with Ben, and Said and Kate neither. What was weird, is that we hear all the time, that they ALL have to get back, and now, the 3 we have now â€˜will have to doâ€™ ? I guess Danâ€™s mother just thinks, ok letâ€™s start off with these, weâ€™ll bother with the others later. Hope the other 3 getting back to the island storyline doesnâ€™t get too dragged out of the next few episodes.

One of the great scenes in this episode was the fit Ben had in the car. He has been wheeling and dealing and pulling all kinds of strings behind the scenes (or at least thats what we are to believe) to keep the six safe and all he gets is hatred from the others. He snaps out of his cool guy role :). Great job by the actor btw, he does one of the best jobs on the show.

Another revelation was interesting and I donâ€™t know what to make of it yet, is that Charlotte already met Daniel, he was a scary old man in her youth ! Does this mean we got more time traveling ahead, even though Locke now has fixed the donkeywheel of time (or didnâ€™t he ?). We also havenâ€™t seen how Dan managed to get into the dharma digging crew, we saw in the seasonâ€™s opener.

The trailer for next week looks promising, we will get to see how you can get back to the island, and Hurley seems to be back in focus.