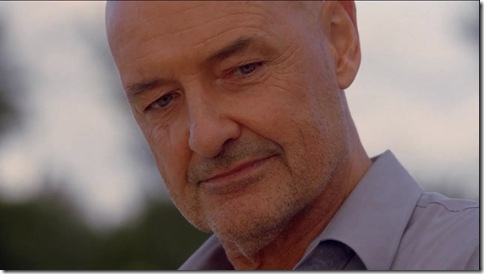 A Locke centric episode, about the time Locke spend off the island, trying to convince the Oceanic Six to return. I was very much looking forward to this one, as I think Locke is the most interesting character on the show, very well acted out by Terry Oâ€™Quinn. And I wasnâ€™t disappointed ! Though it was different from what I expected, it was a great story. Not much to say here, the story was pretty self explanatory.

“There is no helping me. I’m a failure.” -John Locke

The opening scenes were very nice. Somehow Locke is revived on the island, and is in a different time zone it seems than the oceanic six. The plane has crashed and Ben is seriously hurt. Wonder what Locke is going to do with him ? Lock him up ? Ask him why he did what he did ?

Widmore now seems to be the good guy, and Ben is getting spookier every episode (also thanks to Michael Emerson, one of the best acting job on tv ever?). We already knew he was a coldblooded killer, but he takes it a step further this episode, killing both Locke and Abaddon ! I am wondering though, did Ben plan to kill Locke all along while trying to talk him down, or was it his Eloise comment that changed his mind ?

I donâ€™t trust Widmore either, like Locke said, the boat and the explosive didnâ€™t buy a lot of trust. Funny thing is that everyone in the end wants the same thing: to have Locke return to the island and lead, uhm well some folks somehow in a war ? I guess weâ€™ll get that war in season 6 ! Iâ€™ll be on the edge of my seat to follow that ;).