An enjoyable episode again, it continued where LaFleur ended. We swap back and forth between the ’77 crew and the plane crashers (this is getting confusing).

Lapidas: This guy is dangerous ! That boat I came in on, was filled with commandos just to kill him !
Ben: And how did that work out for everyone ?

Kate coming back to the island must make Juliet feel uncomfortable, and I guess thatâ€™s why she is initially off the list of new recruits, but I guess she changes her mind and some to the rescue in the end. 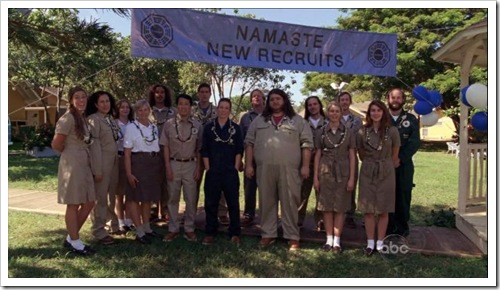 Seeing young Ben and baby Ethan was funny, though to be expected. Young Ben already seems to be eager to know about the Hostiles. Weâ€™ll see what plan Sawyer has to break out Sayid.

Only thing that was odd was Sun not going back to â€˜77. I guess she wasnâ€™t meant to be back on the island. Jin gets all upset and gives away his cover (or at least makes him very suspicious) by frantically go search for the plane, which of course didnâ€™t crash in his timeline. I loved the picture of the class of â€˜77 being shown to Sun by Christian Shephard. It was scary seeing him appear in the abandoned Darhma village. Wonder what the journey will be he is referring to, I am sure weâ€™ll see in the upcoming episodes !