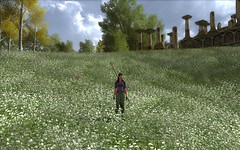 Apparently I am not the only one who enjoys running around in Middle Earth, and taking screenshots. The fun blog of The Ancient Gaming Noob has some nice screenshots and plenty more enjoyable LOTRO related blog post.

Father Roderick has posted the second episode of this interesting podcast at sqpn.com. Looks like another great one 😉 . This is a Frodo / Bilbo centered episode, presented from within Lord of the Rings Online !

Secrets of the Lord of the Rings #2